As of May 2018, nearly 70 million Americans are enrolled in the Medicaid program. Medicaid spending currently exceeds $550 billion dollars annually, which is roughly one-tenth of the total federal budget. Low-income families, pregnant women, and elderly and disabled people are often eligible for Medicaid assistance. However, sometimes these people are not able to receive the legitimate health care service they need due to the millions of dollars which are lost each year as a result of Medicaid fraud. 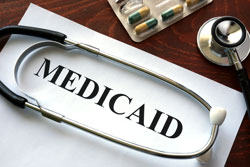 In short, Medicaid fraud is the misuse of federal Medicaid funds and benefits. It can be committed by providers as well as beneficiaries. Medicaid fraud from the beneficiary’s side may include filing false claims on your Medicaid applications, loaning Medicaid ID cards to others (falsifying identity), using more than one Medicaid ID card, changing, duplicating, or falsifying prescriptions, or obtaining supplies from Medicaid with the intention of selling them for profit to others. While sometimes these acts are deliberate, oftentimes people may simply lack the knowledge needed to file applications and use Medicaid services properly. In either case, a person suspected of Medicaid fraud may encounter a lengthy investigation process.

State and federal agencies have access to all of your legal files, including Medicaid applications, tax returns, business records, etc. They are constantly comparing the information on these files and if they discover inconsistencies in the information you provided, you will likely become a target of Medicaid fraud. On rare occasions, a whistleblower, someone who reports illegal behavior may have reported you to federal agencies for Medicaid fraud.

At this point, investigators will start to collect sensitive information about you. The New York Medicaid Fraud Control Unit (MFCU) is a law enforcement entity made up of investigators, auditors, attorneys, and administrative staff. It has the statewide authority to investigate, penalize, and prosecute individuals involved in criminal welfare cases in New York. You will soon receive a letter from the Bureau of Fraud Investigation asking you to come in for an interview on a specific date. The Bureau of Fraud Investigation (BFI) is part of the NYC Human Resources Administration’s Office of Investigation. It investigates individuals and organized groups suspected of Medicaid fraud.

At this stage, it is vital that you find a qualified Medicaid fraud attorney who will represent you in your case. If you ignore the HRA interview letter, there will be serious repercussions. Do not attempt to meet with the interviewers alone, or give out any personal information in order to avoid incriminating yourself. Prior to the interview, you have the right to consult an attorney who will help you collect the necessary documents and submit them for review. You have the right to bring an attorney to your interview with the investigators. You also have the right to remain silent during the interview. Remember that the interviewers will try to use everything you say against you. However, by law you are required to cooperate with the investigators’ requests, such as providing certain documents. Failure to comply may result in additional consequences.

After your attorney has met with the investigators and submitted all necessary documents, the agency can now decide whether to dismiss your case, or to refer it for court prosecution. If the BFI does not categorize your case as a criminal offense, the investigator may refer your case to the Office of Administrative Hearings (OATH) at the New York State Department of Social Services for an Administrative Disqualification Hearing. The purpose of this hearing is to attempt to ban you from receiving benefits for a specific period of time. If your case is passed on for further criminal proceedings, you may face harsh administrative, civil, and criminal penalties. You may be charged with grand larceny, welfare fraud, forgery, etc. Penalties may range from fines, to restitution, to a substantial prison sentence. A permanent criminal record may jeopardize your status as a permanent resident and/or put you at risk for deportation.

The obvious way to avoid being accused of Medicaid fraud is to truthfully report all household incomes and circumstances, as well as protect your personal information and use all Medicaid services responsibly and exclusively for purposes as stated by your provider. If you are a provider who was found guilty of Medicaid fraud, your provider status and/or professional licenses may be suspended or revoked completely. If you are convicted of Medicaid fraud, and were a recipient, you may be disqualified from Medicaid coverage. The Federal government may even confiscate some of your assets in order to make up for the funds you extracted. Needless to say, Medicaid fraud is not a matter to be taken lightly. It can take a heavy toll on your financial life through lengthy and expensive investigations and court hearings, and tarnish your personal and professional image for years to come.